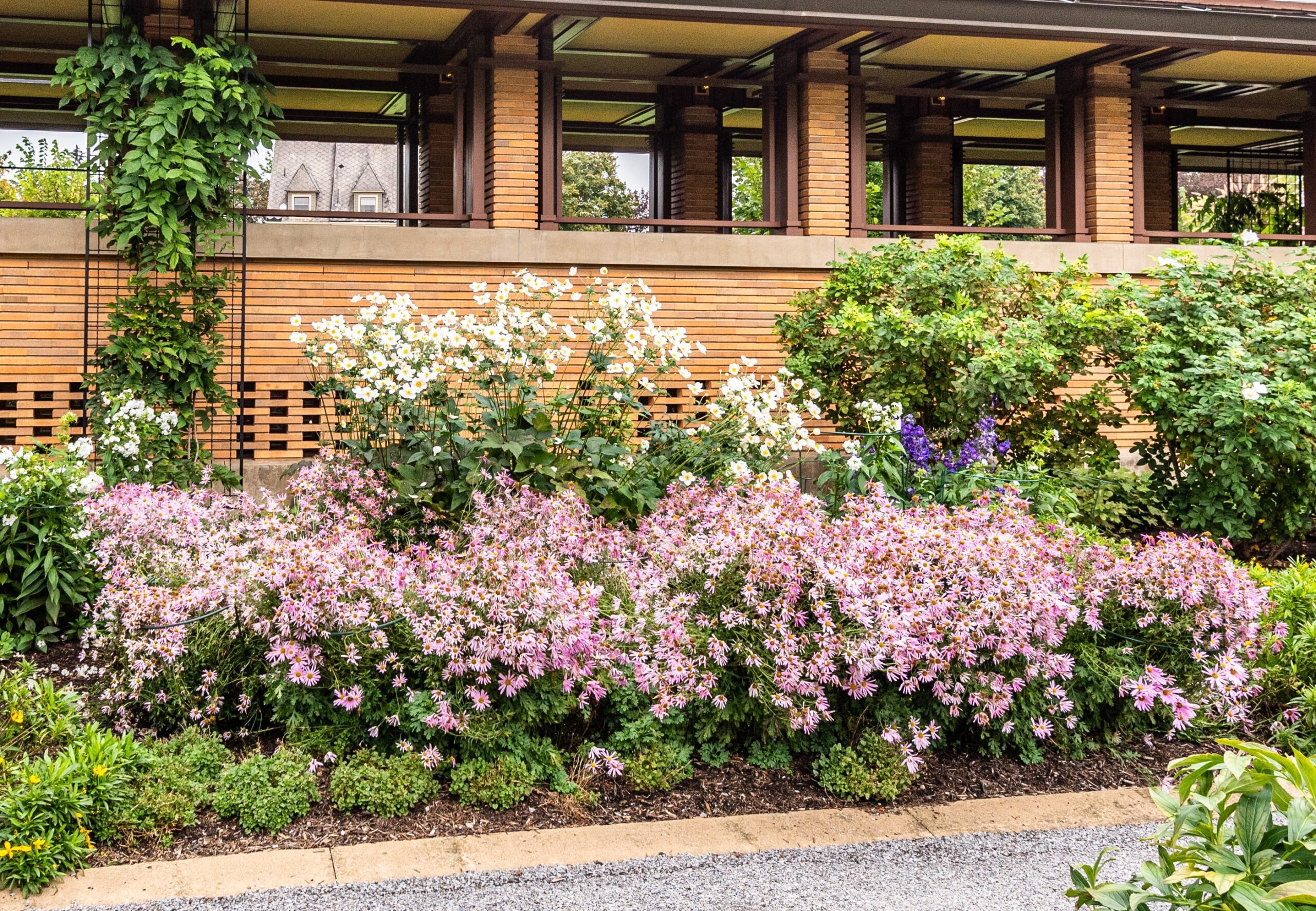 The Chrysanthemum in November

The chrysanthemum holds a special place among flowers. Beloved for its beauty and resilience, it is commonly associated with autumn and even more precisely the month of November.

Perhaps, then, it should come as no surprise that the Martins grew mums on their residential estate. Today, as back then, they can be seen blooming in the landscape in the late summer and fall—both in the half-circle garden known as the floricycle and the easternmost bed of the courtyard garden, as well as in the plot of land where the former Pierson-Sefton greenhouse once stood, now only a footprint.

On November 21, 1905, the Martins started moving into their newly built house designed by architect Frank Lloyd Wright. One year later, the family also began entertaining at home by hosting a series of small and large receptions. One of the most memorable of these get-togethers is commonly referred to as the “chrysanthemum party,” principally because the blossoms of the flowering plant were prominently featured in colorful arrangements throughout the house.

As was the custom, daily newspapers often published society pages chronicling social and cultural happenings in the lives of its residents, including engagements and weddings, births and deaths, as well as gatherings and parties mostly of the privileged class.

So it was that the Martins’ grand chrysanthemum party was publicized in the local press, including the Saturday morning edition of The Buffalo Express. On November 17, 1906, an announcement was featured in the paper’s social calendar. It described the festivities as follows: “The home of Mr. and Mrs. Darwin D. Martin of Jewett avenue was open from 8 to 11 o’clock last evening [November 16, 1906] for a beautiful reception, over 300 guests being greeted by the host and hostess, assisted by Frank Lloyd Wright of Chicago. The house was entirely decorated with chrysanthemums of every variety and color. In the south room, where the guests were received, were tall bankings of pink chrysanthemums. The dining-room was decked with red and in the living room yellow chrysanthemums were artistically used. Mrs. Martin was gowned in an Irish lace robe. Refreshments were served in a large room in the basement, which was elaborately decorated in yellow and white.”

According to the report, there were over 300 guests in attendance. Darwin Martin, on the other hand, specified in his diary that the actual number of those present was 232. Invitees included “neighbors, church friends and social friends.” Among them were the Reverend Thomas Berry, first pastor of the adjacent Episcopal Church of the Good Shepherd; William R. Heath, a fellow Larkin executive who himself had also commissioned Wright to design a home for his family on Buffalo’s Soldiers Place; Bertha Crawford Hubbard, co-founder of the Roycroft community in East Aurora, New York; Katherine Woodford Simpson, president of the Highland Park Literary Club, an active member of the women’s suffrage movement, and director of the city’s Woman Suffrage Headquarters; and local businessperson Edward J. Barcalo, founder of the Barcalo Manufacturing Company best known as the maker of the Barcalounger, the first mass-produced reclining chair.

Without delay, the Martins subsequently welcomed “210 office people” from the Larkin Administration Company for a reception held at their home the very next day. And on November 26th, just before Thanksgiving, they held a more intimate dinner for 40 of their closest acquaintances wh0 had also turned out earlier for their so-called chrysanthemum party.

It is said that the chrysanthemum symbolizes friendship, longevity, renewal, and joy. These are sentiments that perfectly embody the spirit of the Martin House, particularly during fall—the season of abundance and gratitude. Much like the host and the guest in the haiku by Japanese poet Ryōta, we invite you to quietly reflect upon the chrysanthemum and the deeper meaning of home, reunion, and belonging.